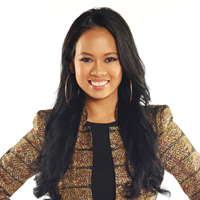 Anya Ayoung-Chee is a Caribbean designer hailing from Trinidad and Tobago to New York City. She was educated at both Central Saint Martin and Parsons New School for Design. Anya’s design career truly began while she represented Trinidad and Tobago in the Miss Universe Pageant in 2008. Her love affair with flowing silhouettes and bold prints would catapult her into a world of design formerly undiscovered. Anya made her first statement in the fashion industry by launching her women’s label, PILAR, in May 2009. After much success, Anya cast her sights further and launched a lingerie line named ANYA DE ROGUE, the first of its kind in the Caribbean in 2010.

In 2011, Anya Ayoung Chee was cast as the underdog in Season 9 of Lifetime Television’s ‘Project Runway,’ she emerged the victor after showing a stunning Spring/Summer 2012 Collection named TOBAGO LOVE at Mercedes Benz Fashion Week in New York. She won the entire competition, the ‘Fan Favortie’ prize as well as prizes from HP/Intel and L’Oreal. Anya emerged from Project Runway as a personality with an amazing story. From then to now Anya has shown her collections in various parts of the US, London, South Africa and throughout the Caribbean. In November of 2015 Anya opened her first retail outlet ‘Exhibit A’ in Trinidad. She has also spoken at schools throughout the US and Caribbean and shared her inspiring story.

During the past five years Anya has also done much for her country, Trinidad and Tobago. In 2012 she was appointed Tourism Ambassador of Trinidad and Tobago and visited many parts of the world as a spokesperson for this jewel of the Caribbean. She has positioned herself as a major player in Trinidad’s Carnival industry and 2016 will be her fifth year designing, hosting events, producing fashion shows and launching products curated for this cultural phenomenon. The Carnival Industry spans many countries and has brought Anya to design for Carnival presentations in Trinidad, Jamaica, LA and Toronto.

Anya has also lent herself to the creative arts by founding a project in Trinidad entitled ‘HOME’. HOME is a space for Caribbean creatives to work and collaborate and has been established since January 2015.

Her passion does not end there as she has been the spokesperson for The Tallman Foundation for the past three years. The Tallman Foundation is an organization that focuses on bringing art and music education to the underprivileged youth of Trinidad. She also holds the position as an Ambassador of Soleil Global.